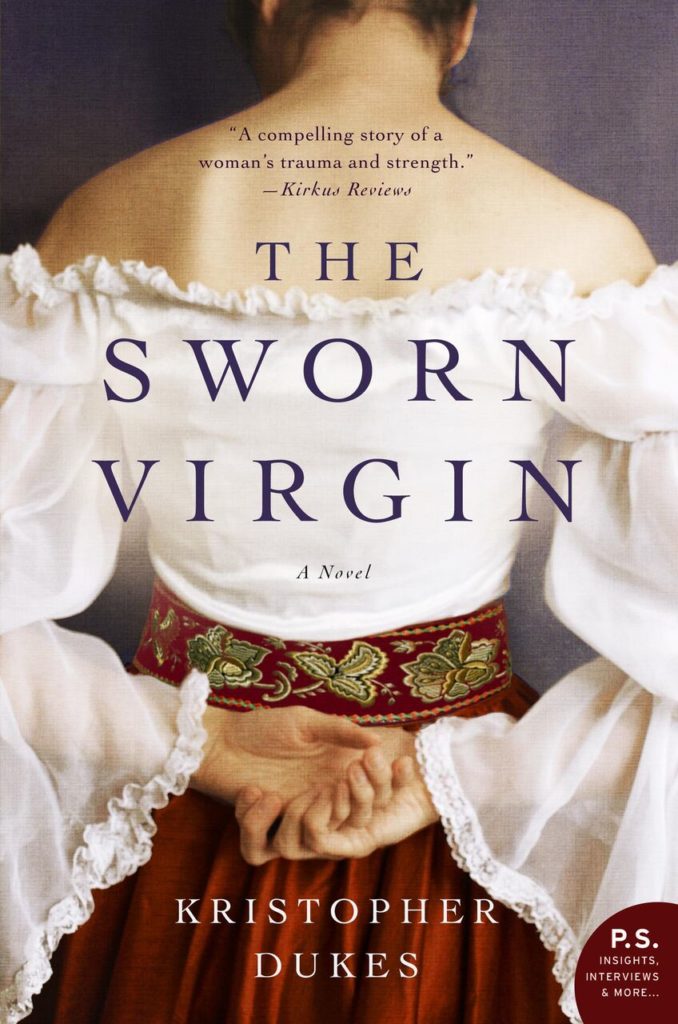 As wild as the true tradition of a sworn virgin is, I found it resonating with me on an emotional level. How often do women, even in the international cities of today, find themselves trading in their femininity in exchange for being treated as respectfully as a man? Diana’s story is one of a unique young woman in a faraway world, but I believe the heart of her journey mirrors many women’s. We are countless people throughout our lives, hungering for real relationships while struggling not to be defined by them, all while balancing what society wills us to want with what our deepest dreams are.

D ukes’s gripping historical novel tells the tale of a desperate Albanian woman who will do whatever it takes to keep her independence and seize control of her future…even if it means swearing to remain a virgin for her entire life.

When eighteen-year-old Eleanora’s father is shot dead on the cobblestone streets of 1910 Albania, Eleanora must abandon her dream of studying art in Italy as she struggles to survive in a remote mountain village with her stepmother Meria.

Nearing starvation, Meria secretly sells Eleanora into marriage with the cruel heir of a powerful clan. Intent on keeping her freedom, Eleanora takes an oath to remain a virgin for the rest of her life—a tradition that gives her the right to live as a man: she is now head of her household and can work for a living as well as carry a gun. Eleanora can also participate in the vengeful blood feuds that consume the mountain tribes, but she may not be killed—unless she forsakes her vow, which she has no intention of ever doing.

But when an injured stranger stumbles into her life, Eleanora nurses him back to health, saving his life—yet risking her own as she falls in love with him…

“It’s hard to believe that the culture Dukes describes was ever real, but the amount of research she put into this book definitely shines through. The story remains fascinating throughout; readers will definitely find it difficult to put this novel down.”— San Francisco Book Review

“Dukes’ provocative first outing offers a fascinating look at Albanian culture and the status of women and is sure to be popular with book clubs.” — Booklist

“Kristopher Dukes vividly brings to life a world as unfamiliar as it is endlessly fascinating… a compelling, dramatic, romantic and at times hilarious read. I highly recommend this novel and eagerly look forward to more from this writer.” — W. Bruce Cameron, New York Times bestselling author of A Dog’s Purpose

“Dukes has chosen an engaging setting for this novel, with its mix of medieval and modern elements, and fleshes it out with vivid details . . . A compelling story of a woman’s trauma and strength.” — Kirkus Reviews

“Though it takes place long ago, in a culture far removed from my own, this novel touched me, often made me laugh out loud, and ultimately reminded me of how much people judge each other by gender to this very day.” — Cathryn Michon, New York Times bestselling author

“It’s hard to believe that the culture Dukes describes was ever real, but the amount of research she put into this book definitely shines through. The story remains fascinating throughout; readers will definitely find it difficult to put this novel down.” — San Francisco Book Review

“The Sworn Virgin is an extraordinary and fascinating canter through the historical world of Albania at the turn of the 20th century… a compelling read. I wouldn’t hesitate to recommend it.” —Lady Nicola Mendelsohn